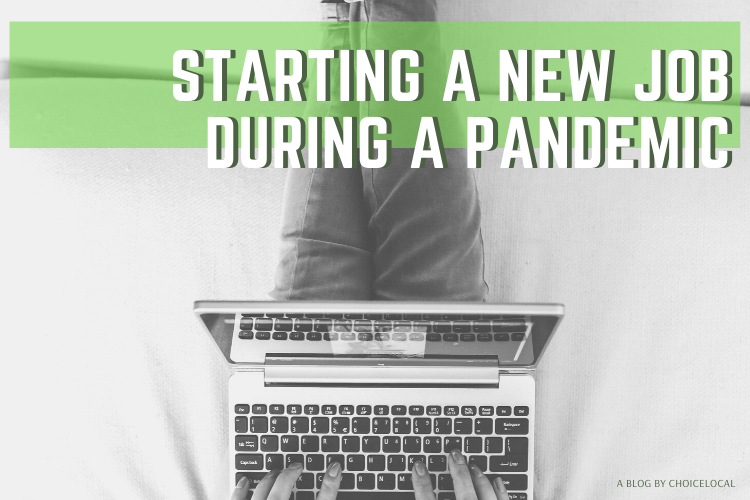 Well, I was new — for a bit there. But now that things have started to settle down, at least in the sense of working with new teammates, partners and learning the ropes, I can finally take a step back and say, “How has it already been more than 100 days?”

You see, I started a new job this year.

In fact, it’s the very one I’ll be writing about in this blog and merely two and a half weeks into starting the position, I had just finished training and was getting up and running on my own.

I am so thankful for that time, because when I arrived at the office on March 12 to see my teammates walking out saying, “We are working from home,” I knew that meant I would be operating mainly solo.

The good news is, though, that I was already used to working remotely and using nearly all of the same tools we do here. So, I wasn’t too worried about that part, but I was still new.

The first week went by, then the second, then the third and we all started to settle in and get used to being 100% remote. Team communication hasn’t missed a beat and as a side note, we were already working remotely a few times a week, so the adjustment wasn’t a major curve like it may have been for others.

And here we are today, still as functional and operational as before.

The funny thing is, I had been meaning to tackle this blog earlier than I did. I was thinking this was going to be a much different piece, in a more traditional sense. If you are familiar with our blogs here at ChoiceLocal, many of them are stellar pieces about SEO, PPC and other happenings in the digital marketing space. I had started thinking about what I could contribute to the page months ago.

But as time went on, I kept thinking while I have already learned so much working here in such a short amount of time and what knowledge I already possessed through my experiences in the field, there’s just simply more to be said at this moment other than how to be well-versed in digital marketing. There was more I needed to say than to just provide a refreshed take on an SEO blog.

And here it is.

We have a core set of values we adhere to — and that was a huge draw for me when I learned about ChoiceLocal. Not to say previous jobs didn’t have core values — but when every single teammate I came into contact with before being hired — during the process — and to this day — weaves them into casual conversation, I knew they were true to it.

Which brings me the one, in particular, I wanted to call out. Everyone a leader.

During a new job interview, you’re often asked to give an example of a time you solved a tough problem by yourself, hence, being a leader. You’ve had this conversation, right?

Well, what I’ve learned in the short time working here is everyone I am working with is truly a leader, and I think I’ve gotten a front seat to the show due to the state of the world right now. The communication, transparency and willingness to help has been second to none.

I know this to be true because times are tough. Let’s not mince the words here, we know they are. Everyone is trying their best to — excuse the rehashed verbiage hereof — find a #newnormal.

But while working from home at a new job during a global pandemic among everything else going on — and keeping operations and work-life balance as normal as possible — that’s when you know everyone you are working with is a leader, because the team has made it work.

The time’s I’ve seen everyone a leader has been plenty, but the top that comes to mind, since it impacted me directly, has been helping me with something. The new person.

Instead of letting me flounder around in the background until I raise up the flag in defeat, everyone on this team that I work with has stepped up to the plate and has helped me figure out something as small as, “Hey, where do I find the logins,” to, “I cannot figure out why the button on this website isn’t working.”

My teammates wanted me, the new person, to learn and succeed right off the bat.

One of the finest examples of everyone a leader being on display is during our team meetings. This is when that core value really shines. The presenter, usually our CEO Joe Soltis, will open up the floor to an informal five-minute session of gratitude.

You heard me correctly. We give thanks. Shout-outs. Give props to teammates that have gone above and beyond. And, a lot of people speak up, which is saying something to get group participation like that. And those are the kind of stories that need to be told right now.

They say people come together when times are tough, and I think that’s what many are trying to do right now. But what I do know for sure is that, whether this is the new normal, or the two and a half weeks prior that I had in the office were an indicator, one thing has remained the same.

This team of people I am working with is going to consistently show up each day, embody the skills of leaders, and help out their teammates or our partners when and where they can. They’ll even help out those who have yet had a chance to speak up and give a shout-out during one of those team calls.

So while I have your attention, here’s my chance to say it in the simplest way.

Thank you, team, for being leaders during such a remarkable time.

The new person appreciates it more than you know.

Adrienne is a Junior Account Executive at Choicelocal and has a background in SaaS technology, marketing and writing. When she’s not at work, you can find her cheering on a Cleveland sports team with her other half, exploring the city, enjoying the company of two rescue cats or reading.